On the occasion of EUROCORR 2015 in Graz, Austria, the European Corrosion Medal was awarded to 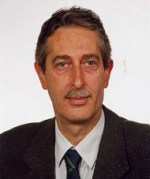 The purpose of the European Corrosion Medal is to recognise achievements by a scientist, or group of scientists, in the application of corrosion science in the widest sence. The recipient(s) must be of a nationality corresponding to one, or more, of the Member Societies of the EFC and the work must be conducted within a European country.
The European Corrosion Medal consists of a bronze medal, a diploma and a sum of 1000 Euros and is awarded every year preferably on the occasion of a Europen Corrosion Congress (EUROCORR). The laureate is invited to give a lecture related to the work for which the medal was attributed.

On the occasion of EUROCORR 2015 in Pisa, Italy, the Kurt Schwabe Prize was awarded to

The 2015 prize was presented to Dr Marta Mohedano Sánchez for her extensive contribution in the field of corrosion and protection of light alloys. Her work is supported by 35 publications; she has participated in 4 nationally and internationally funded research programs and 5 industrially funded research and development projects. Dr Marta Mohedano obtained her degree in Chemical Engineering in July 2006 from University Alfonso X el Sabio of Madrid, Spain. In 2011, she received her Doctorate (Ph.D.) in Materials Science and Technology from University Complutense of Madrid (UCM), Spain.
From December 2013, Dr Mohedano has been a post-doctoral Humboldt Fellow in the Corrosion and Surface Technology group, Magnesium Innovation Centre, Helmholtz Zentrum Geesthacht, Germany. Prior to this (between January 2012 and May 2013) she was a post-doctoral researcher in the group of Characterisation, Corrosion and Degradation of Materials of Technological Interest at UCM, Spain.
read more (EFC Newsletter No 23, p6)

The award was presented to the laureate at the opening ceremony of EUROCORR 2015 in Graz, Austria, on 7 September 2015.

On the initiative of the Hungarian Corrosion Society (HUNKOR), and supported by the "Kurt Schwabe Foundation" the Kurt Schwabe Prize has been established in honour of the late Professor Kurt Schwabe.
The award, consisting of a certificate and a sum of 500 Euros, is presented every three years to a young scientist below 35 years of age in recognition of his or her scientific and technical contribution to the field of corrosion on the basis of publication.

For the first time an EFC Honorary Fellowship has been awarded. This was conferred on

at EUROCORR 2015 in Graz in recognition of his outstanding commitment to the European Federation of Corrosion and its committees and the support of its mission and activities for many decades. He has been pro-active and at the forefront in the evolution of the EFC as representative of one of the EFC Founding Member Societies CEBELCOR in the General Assembly and as an active and long lasting member of the Board of Administrators (BoA) and Science and Technology Advisory Committee (STAC). Furthermore, his contributions to international networking and collaboration across the borders of the EFC, among others as President of the International Corrosion Council ICC, are greatly appreciated and acknowledged.

Further information on this Honorary Fellowship can be found on the EFC website www.efcweb.org/Honorary+Fellow.html 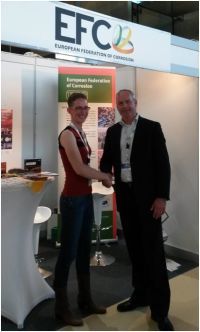 On the occasion of EUROCORR 2015 in Graz, Austria, the Young Author's EFC Poster Award was presented to

for the outstanding poster contribution on "Atom Probe Microscopy of Oxidation Products". 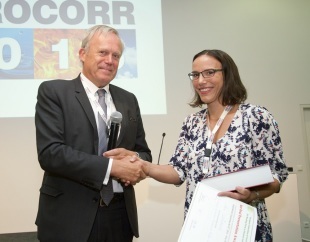 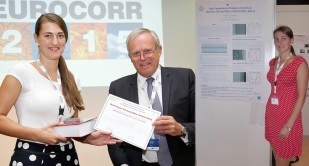