The Congress will be held at Le Corum, a Congress Centre situated in the centre of Montpellier, at less than 100m of the historical city. 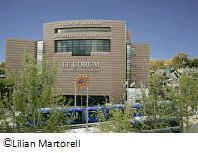 Le Corum is characterized by an unique and modern architecture. This building is dedicated to culture, business, science and combines in a single site the most modern techniques of a congress center. 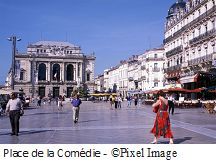 The location in the city center is unique for a large and modern building like Le Corum close to the famous “Place de la Comédie”.

Many artists became fond of cities in the South of France, like Montpellier, dominated by the famous “Pic Saint Loup”, close to the seaside and surrounded by a large number of natural areas.
It is particularly pleasant to enjoy sitting and discussing along the sides of its beautiful public squares under centenary plane trees.

Located between sea and mountains, Montpellier benefits of exceptional touristic and cultural resources.

Montpellier can easily be reached by car, train and plane.
An international airport at one hour flight from Paris and frequent connections by TGV (High Speed Train) facilitate the easy access for participants.

No doubt a great number of scientists and engineers will appreciate this choice and will enjoy the EUROCORR 2016 venue.